Tome of the Future Ancients 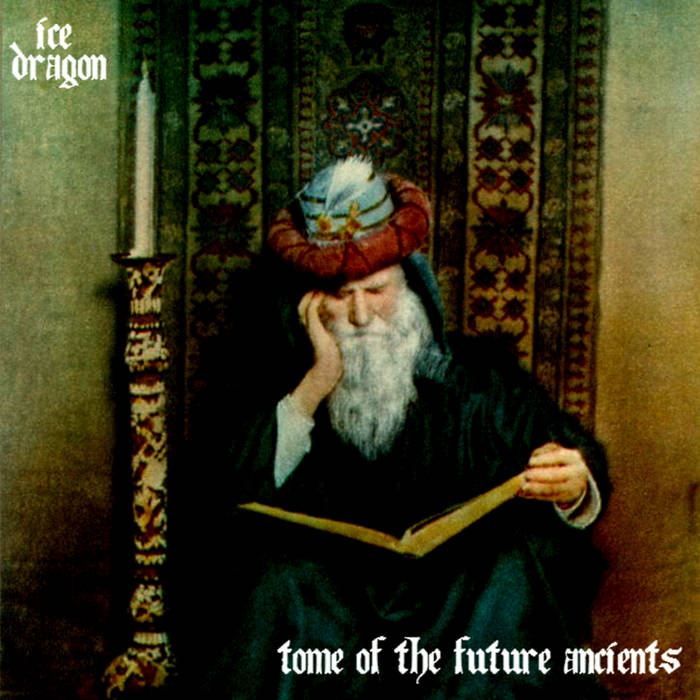 Mitchfynde Droning, hazy, otherworldly sounds echo out from the tome. Will you open it or leave it on the shelf for someone else to find? Favorite track: Steal Away From Hell.

Russell Whyman This is obviously and Ice Dragon album. Very similar to the others and Sabbath inspired but none the worse for that. A little more psychedelic than usual maybe.

A good album and worth a listen.

Broken Beard The battery of torn-paged suspicions and spells this album promotes are surely divined by some great and sinister power. It masterfully blends the witchy metal of Black Sabbath, the crushing curses of Electric Wizard, and the thick dope smoke of Sleep, but it also integrates a phantasmagoria of heavy psych-drone into that formula for an all-together eerier descent into the mouth of ritualistic madness.
more...

YOU TOOK IT TOO FAR

Emperor of the Underground of Doom..

To Whom It May Concern:

I recently discovered the manuscript while rambling in the woods with my dog. It was a few weeks shy of the vernal equinox, and the fine ends of the trees had just begun to show green. My hound had left me alone on the trail to go nose about the scrub—and possibly ferret out something living to eat—when suddenly I heard him calling. I found him pawing furiously at the ground in front of a weird tree with a huge trunk and massive branches sprouting low. Its bark was hard as granite and almost blue in color. My dog ceased his digging and looked at me, seemingly imploring me to dig further. I loosened the soil with my knife and continued the excavation until I struck something hard: it was a bound volume bearing the engraving “Tome of the Future Ancients by Ice Dragon." Inside, the leaves were filled with inscrutable symbols, ritualistic diagrams, and illustrations of strange flora and fauna. Even the must that invaded my nose as I turned the pages was alien.

What had I found?

Once home, I began to research and quickly discovered that there was a musical entity named Ice Dragon who worked in a basement not far from where the book had been. I contacted them to see if they had hidden it as some sort of promotional stunt. When I mentioned the engraving on the front, there was a pregnant pause on their end of the line. They assured me they had no knowledge of the book. However, what they revealed next gave me pause:

They had just completed their third album, and it was titled Tome of the Future Ancients. It was to be released on the day of the equinox. Sure enough, this turned out to be true.

By now, I was almost certain they were simply in the business of creating hype. There was no doubt they were responsible for the creation and burying of the book. Or so I was convinced, until carbon dating proved ineffective, and my academic peers who specialize in cryptography responded to my inquiries with blank looks.

Then, quite simply, the book vanished. One day it was in my study, and the next it was gone. Perhaps one of my colleagues grew jealous of my discovery and stole it; perhaps the woman who cleans my house disposed of it in fear upon opening it. Truthfully? I’m almost relieved it is gone for I hadn’t experienced a restful night since bringing it into my home. My dreams were black, and my dog would bay at the threshold of the room that held the damned book.

For now, the only Tome of the Future Ancients by Ice Dragon available for study is this one. May it always be so.

Bandcamp Daily  your guide to the world of Bandcamp

Cannibal Corpse's George "Corpsegrinder" Fisher stops by for an interview